My posts here on 618 Garage have been a bit scattered mostly because of my latest BBQ project – an Ugly Drum Smoker build.  Ugly drum smokers, otherwise known as a UDS, have long been touted as a poor man’s Green Egg smoker.  Seasoned barbecue veterans across the nation lean on these smokers as their competition vessel of choice, swearing by their unique ability to maintain that beautiful low and slow temperature of 225 degrees.

My Masterbuilt electric smoker is what got me into smoking meats and is a great “set it and forget it” machine.  But there have always been a few things missing from my cooks (mainly a smoke ring) that have lately sent me searching for an alternate way to smoke meat.  Strolling down to my local Green Egg vendor and buying a $600 plus ceramic cooker is NOT an option for me, so I decided to embark on the journey of creating what many call the next best thing.  Join me as I outline the good, bad, and the ugly of my UDS build.

Ok, first things first: A quick Google search of “UDS build” or something similar to that will net you plenty of instructions on how to build one of these.  What do they all have in common?  Each set of plans loves to mention how easy it is to make a UDS of your own.  My post, sets out to be different than other UDS articles out there.  I hope to bring you the trials and tribulations of building an upright barrel smoker.  The ups AND the downs, the mistakes AND the triumphs, the victories AND… Ok, you get the point – I’m not afraid to show you what went wrong during my build to make sure that you don’t do the same if this is something that you decide to try out for yourself.  Here we go!

A steel 55 gallon drum is the crux of the UDS.  The steel drum’s shape is what helps maintain temperature with very little adjustment during a cook.  55 gallon steel drums are used for a lot of things and depending on where you live they can be easy to find or like looking for a needle in a haystack.  My search for a barrel started on Facebook where I promptly found someone who was selling used 55 gallon drums for $10.  Score!!  I couldn’t get in my truck fast enough to go pick one up.  Upon arrival, everything seemed to check out so I loaded one up to bring it home for the burnout.  According to the seller, the drum was food grade and had been used to store and transport some sort of thick, gooey, food additive.  Initially I saw this as a perk, food grade has got to be the way to go right?  Wrong.  Food grade barrels have a spray on coating that ensures that whatever is stored in the barrel doesn’t stick.  Good for the food industry, bad for me.  Turns out this epoxy liner is really, really hard to get off.  Leave it on you say?  Bad idea.  After some research, I found that spray on epoxy liners can give off toxic fumes when heated.  Not a good combo for a barrel smoker.  The picture below shows the burn out process that I did before I realized that the barrel had a liner.  The burn out is one way to sanitize and prepare the inside of the barrel for the rest of the project.  Even though I had to trash this barrel because of the liner, the burn out is still something you should do.

Step 1A – Let’s Try This Again: Choosing a Safe Barrel

After some research I decided to go with a brand new, unlined 55 gallon drum.  About an hour away from my house I found a company that sells and ships large containers, including 55 gallon drums.  I ordered a new barrel online and then picked it up the next day.  For many, finding the right barrel is the hardest part of this project.  I got lucky with having an industrial store so close to home.  My suggestion: don’t settle for a used barrel.  Spend the extra time and money to find a new, unlined barrel.  That  way you can sleep at night knowing that the barrel you are cooking food in has never been used to carry anything toxic.  Peace of mind, for me anyway, is a big deal so $70 later I had my brand new barrel.  Time to move on to the prep phase. 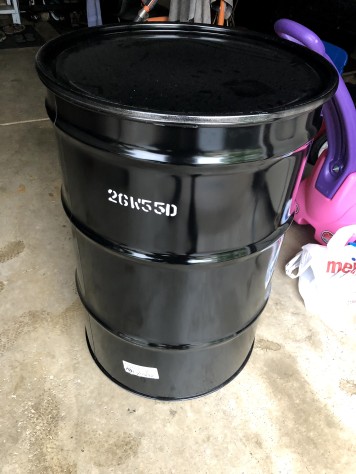 The burnout process is fine and good but I was ready to move on at this point and get this part of the project done… fast.  So I went to Menards and bought a propane powered weed torch.  This thing is awesome.  For $50 I was able to raise the temperature of the barrel to about 1,000 degrees quickly.  After taking a torch to the entire barrel, I sanded the whole thing with some sanding bricks.  I found this to be the best way to ensure that I got rid of the anti-rust agent that they spray  onto the inner part of the drum.  After the whole thing was sanded I rinsed it out with soapy water.  I found that the water beaded up in spots that I did not sand well enough.  After hitting those spots a little more with sand paper, I finally had a fully prepped barrel.  There’s no way to sugar coat this process.  Thoroughly sanding a 55 gallon drum by hand sucks.  But the end result is a clean, safe barrel.  The exterior will also accept high temperature paint much easier.  There is also a gasket that is glued into the lid.  That has to go.  Pry it out with a flat head screwdriver and then use Goo Be Gone to get ride of any adhesive that is left behind.

I decided to make 3 air intake holes at the bottom of the drum to control air flow during a cook.  Two of those air holes will be controlled with a ball valve for fine adjustments while the other will have a cap on it that can be removed to add more air to the fire.  A step drill bit is the way to go here since your going to need a 1 inch size hole.  I went cheap since I don’t use this type of drill bit often.  You get what you pay for of course, as the drill bit I bought for $14 on Amazon was basically destroyed after this build.  High quality bits  can be found at your local hardware store if you are in the market for something nicer.  I created small pilot holes with a drill bit first before making the larger 1 inch holes.  That kept the step bit from slipping across the slick barrel surface during drilling.  I used a 1/4″ hole for the grill grate supports and a 5/16″ hole for the air vent bracket holes.  I was able to drill those with a regular drill bit.  For the lid vents I went back to the step drill bit and made them 1 inch in diameter (more on this part of the build later). 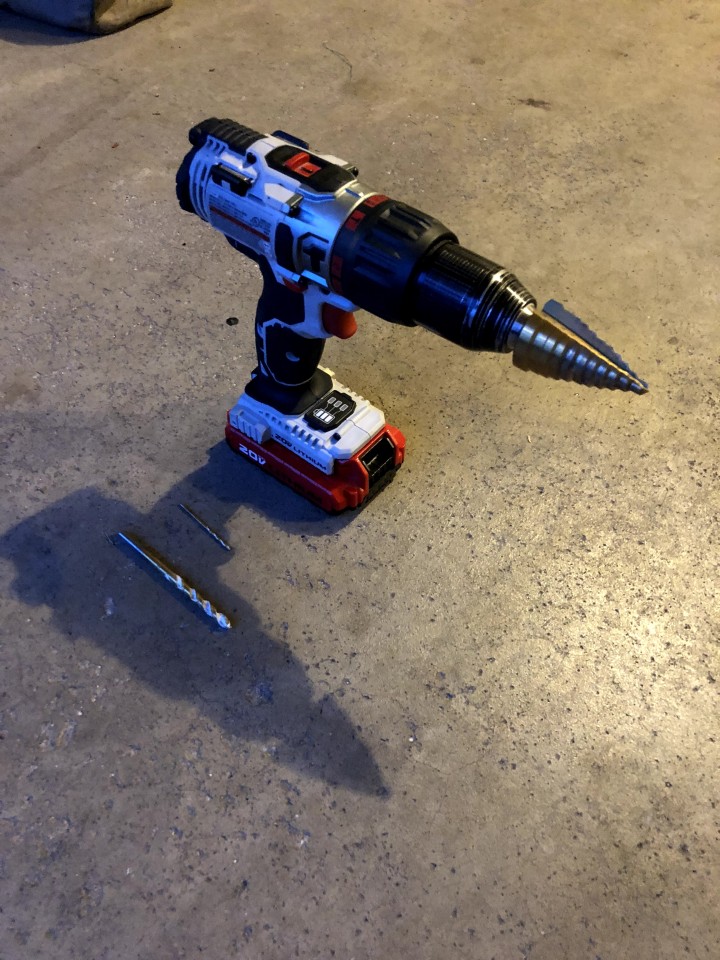 When choosing which hardware to go with DON’T USE ZINC PLATED OR GALVANIZED bolts!!  At high temperatures, these parts can give off toxic fumes that may penetrate the meat.  Enough said for me.  I set out to make a smoker that I can confidently make tasty AND safe meat.  With that in mind, stainless steel parts are the way to go.  Also, go with black plumbing pipes, 3/4″ in size for all air vents and intakes.  To secure the pipe fittings, make your way to the electrical section of your hardware store and pick up some conduit nuts.  They work perfect.  Comment on this article if you are interested in a complete list of parts.

I hate painting.  But it’s a necessary evil in order to make the ugly drum smoker a little less, well, ugly.  I went with brake caliper paint which has a max temperature rating of 900 degrees.  Plenty high for a smoker.  I went with a two tone paint scheme, spraying auxiliary parts silver and then majority of the barrel blue.  Below are some pictures of that tedious and boring process (told you I hated painting).

Time to put everything together.  The 3/4 inch nipple fittings slide nicely through the 1 inch holes that I drilled earlier.  From there, I assembled the 90 degree elbows onto the 3/4″ pipe.  The conduit nuts hold everything onto the barrel from the inside.  I bought some cheap wheels too that I put on the bottom of the drum to allow me to move the smoker around a bit easier (I am glad I did, this thing gets heavy when it is fully loaded).  I’ve included some pictures on what it looks like when the grill grates (your standard 21″ Weber grates) are inserted into the barrel.  One note on the grates: I went with 3 grates total.  The first is 4 inches from the top of the smoker, the second, which is used for larger pieces of meat is 8 inches down, and the 3rd, which I use for drip pans/water pans is 16 inches from the top.

I bought some cheap handles, painted them and put one on the lid and two on the sides of the smoker.  The handle on the lid is an absolute must.  The handles on the sides of the smoker are useful for me because I plan to carry the smoker from my garage to the back patio for cooking.  Other people may forgo these handles, personal preference.  Although the one inch vent holes I made in the lid would work for allowing smoke to escape during a cook, I wanted to be able to have a system that would be a bit more smoke resistant.  I bought a few more black iron 90 degree elbows and inserted them into the holes in the lid.  In theory, this will allow less moisture to enter the smoker if it starts to rain.  Mark had some fire tape left over from a job he did on his GMC so I took that and created a heat-resistant gasket for the lid.  This should ensure that no smoke escapes from the edges of the lid during a cook.  Future accessories that I have in mind include some cedar plank shelves and a metal sign for decorative purposes.  Important: I bought a really high end (cost me $50) dial thermometer for the front of the smoker.  As it turns out, this style of thermometer is incredibly unreliable.  My guess is that the insulation that the barrel provides throws off the probe.  It has nothing to do with the quality of the device.  So, since it’s basically just there for looks,  go with something cheap here or no thermometer at all.  When I’m cooking, I use a remote digital thermometer to monitor the temperature of the smoker.

Here’s the UDS completely finished.  Next up for my UDS is seasoning.  That process will be highlighted in my next post.  I have to say that this was a really fun project, except for the painting.  I can’t wait to really put this smoker through its paces and see if it can live up to the hype.  Be sure to check back here as I document my cooks on the new ugly drum smoker.  Also, please reach out to us if you are interested in a more detailed parts and tools list for this build. 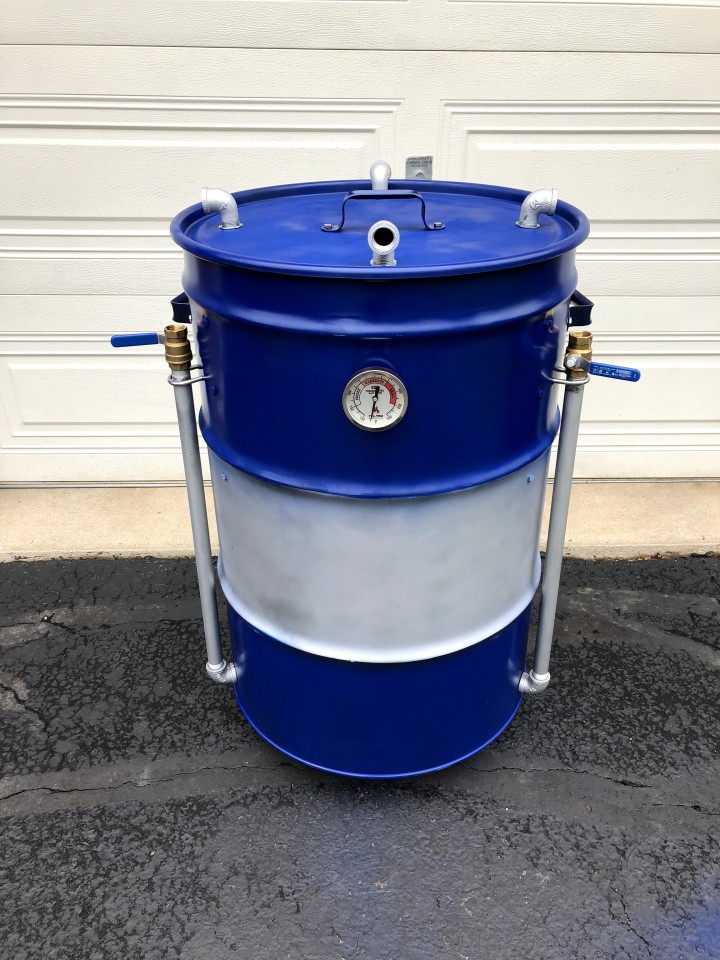 2 thoughts on “My Pretty…Ugly Drum Smoker”